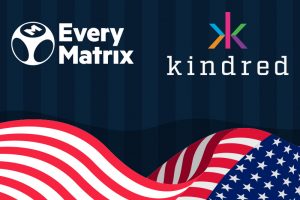 Online casino and betting software provider EveryMatrix has made further moves into the regulated US iGaming space with a recently signed deal with Stockholm-listed online gambling operator Kindred Group.

Under the terms of the partnership between the two companies, Kindred will provide EveryMatrix online casino content in states where the operator is licensed to offer iGaming services.

Kindred is a leading iGaming and digital wagering company that runs nine global and local brands, including flagship operation Unibet. The operator currently caters to more than 30 million customers from different parts of the world.

Kindred made its first foray into the US in 2018 when it partnered with Hard Rock Hotel & Casino in Atlantic City to launch a gambling site in New Jersey’s regulated market. Through its Unibet brand, the company has expanded in several more states since then.

The operator’s partnership with EveryMatrix will enable it to significantly expand its US-facing online casino offering by integrating the iGaming provider’s proprietary content from its in-house Spearhead Studios and Armadillo Studios.

Through this integration, the operator will also be able to add more game makers as they become available through its provider partner’s iGaming Integration Platform, CasinoEngine.

CasinoEngine is EveryMatrix’s hugely popular online casino content aggregation solution. It features one of the industry’s largest libraries of gaming content that is also supported by a comprehensive cross-vendor bonusing system.

This new partnership is set to help EveryMatrix further expand into the US market. The company kicked off its American expansion campaign in November 2020 when it applied for a license in New Jersey with the local gambling regulator.

A few months ago, the company opened its first game development studio in the country, Armadillo Studios. The new games creator is based in EveryMatrix’s US headquarters in Miami and will be developing US-focused iGaming content.

Of their partnership with Kindred, EveryMatrix President Americas Erik Nyman said that the operator is one of the “earliest adopters of iGaming and sportsbook globally” and that it has been “very successful since its inception.”

Mr. Nyman added that they are very pleased to become Kindred’s “trusted partner” in the lucrative US market. The official also explained that EveryMatrix will be supplying a large selection of casino titles to appeal to the operator’s US customers and that this new deal further enhances his company’s “position to become the leading technology provider in America.”

Kindred Group SVP USA Manuel Stan said that they are very excited to form this content supply alliance with EveryMatrix and bring top-quality content from Spearhead Studios and Armadillo Studios to their US players, in their intent to “bring a best-in-class casino offering to the US.”