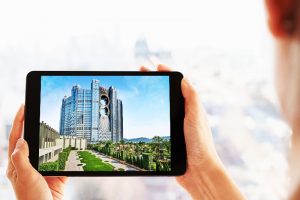 Lawrence Ho-led company Melco International Development confirmed this week that work has begun on the second phase of its Studio City integrated resort in Macau.

The property was launched in the fall of 2015 with great fanfare and Hollywood superstars Robert De Niro and Leonardo DiCaprio and director Martin Scorsese attending the Grand Opening ceremony.

Melco spent $3.4 billion on the first phase of the luxury multi-purpose complex and has now earmarked between $1.35 billion and $1.4 billion for the planned expansion of Studio City.

What Will Phase Two Include?

Melco said in its latest financial report, released earlier this week, that Phase Two of its Studio City property will include two new hotel towers with a total of 900 rooms and suites.

The expansion plan further includes the addition of a cineplex, “one of the world’s largest indoor water parks”, as well as MICE facilities.

Back in 2015, Studio City opened doors with a casino with 250 gaming tables offering baccarat, blackjack, roulette, and other popular games as well as more than 1,200 slot machines.

The two towers – The Star Tower and The Celebrity Tower – currently feature a total of 1,600 rooms and suites.

Melco said this week that the government of Macau has granted further extensions on the deadline for the development of the public land where Studio City is located. The company noted that it is now expected to fully develop Studio City’s land by May 31, 2022.

However, Melco said in its latest financial report that it can provide no guarantee that it would be able to complete construction work by the above deadline.

The company said that prior the coronavirus outbreak, their estimated development period for Phase Two of Studio City was 32 months, but that period can now be extended due to the global health emergency.

Melco further noted that if additional time is required to complete development work on the remaining portion of Studio City land, they will have to apply for extension of the development period, “which shall be subject to Macau government review and approval at its discretion.”