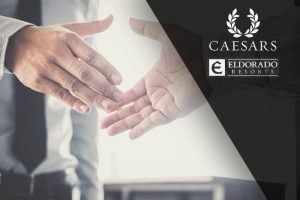 The Maryland approval arrived just a day after Eldorado CEO Tom Reeg told investors that he could “see the finish line” on the tie-up and that he anticipates the deal to close early in the second quarter of the year.

The transaction required approval from the Maryland gambling regulator because Caesars operates the Horseshoe Casino Baltimore property in that state. Eldorado and Caesars’ combination is subject to approval from the regulatory bodies of all states where the two companies operate casinos in. The deal also needs approval from the Federal Trade Commission.

The Maryland State Lottery & Gaming Control Agency was the latest regulator to give the mega-merger the go-ahead. Over the past several months, Eldorado and Caesars have secured clearance from regulatory bodies in Illinois, Iowa, Louisiana, Mississippi, Missouri, and Pennsylvania.

The two companies need to gain approval from regulators in a total of 17 states in order to be able to close the deal that will create the largest US casino operator.

Eldorado’s CEO told investors this week that preparations for the merger progress smoothly and that he expects the combination of his company with Caesars to be a home run for everyone involved.

Mr. Reeg will take over as CEO of the combined entity. The enlarged group will take the Caesars name, but Eldorado will hold a majority stake.

The Eldorado boss also told investors that selling a Caesars property on the Las Vegas Strip would be one of their top priorities once the deal closes. Mr. Reeg noted that any sale agreement would be signed only after the tie-up is finalized and that the sale of a Strip property would likely occur within 12 months after the combination.

In addition to a Strip property, the enlarged casino operator would also need to sell a Lake Tahoe casino.

Mr. Reeg revealed that many Eldorado properties will likely take Caesars brands once the merger closes. He said that “Caesars would be the highest-end properties […] but I would expect to see a lot of our assets change into Horseshoe or Harrah’s over time.”

One issue that remains unresolved ahead of the tie-up is who will run the enlarged group’s sports betting operations. Caesars has its own sportsbook brand, while Eldorado has a long-term agreement with British bookmaker William Hill to manage its sportsbooks in states where sports betting is or will become legal.

Mr. Reeg told investors that he does not expect to take them until 2021 to find a solution, but that he would also not expect that to happen “three weeks from now.”