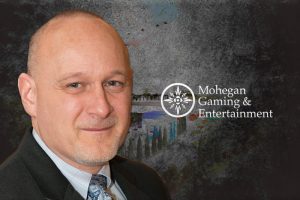 Mohegan Gaming & Entertainment’s new CEO, Ray Pineault, was recommended for licensing by the Nevada Gaming Control Board on Wednesday, although the Connecticut-based casino operator is facing disciplinary action from the regulator.

Mr. Pineault was named interim CEO for Mohegan in late March after the company’s former top executive, Mario Kontomerkos announced his departure after three years on the job. The casino operator appointed Mr. Pineault as its permanent chief and president late last month.

During his licensing testimony on Wednesday, Mohegan’s new boss apologized to Nevada regulators on behalf of the company for violating state-mandated health and safety regulations at the opening of Virgin Hotels Las Vegas on March 25.

The operator signed a management contract with Virgin Hotels in 2019 to operate the property’s 60,000-square-foot casino. Virgin Hotels Las Vegas is located at the former site of Hard Rock Hotel & Casino Las Vegas.

Mohegan obtained a license from Nevada gaming regulators to run the casino at the renovated and remodeled property last fall.

The state Gaming Control Board issued a five-count complaint against the tribal operator on Wednesday, saying that during the resort’s opening, it was in violation of Regulation 5 for failing to “exercise discretion and sound judgment to prevent incidents which might reflect on the repute of the state of Nevada and act as a detriment to the development of the industry.”

No Face Masks and Social Distancing

The complaint specifically pointed to the fact that patrons were not wearing face masks and were not practicing social distancing during the party for the opening of the hotel and casino complex.

The regulator used photographs posted by local news outlet Las Vegas Review-Journal and by Virgin Hotels on the new property’s official Twitter account that showed people not wearing proper face coverings and not observing social distancing mandates. Some of the Virgin Hotels photographs even showed celebrities and famous influencers not following anti-pandemic rules.

In a stipulated settlement filed with Nevada regulators in May, Mohegan has agreed to pay a $60,000 fine. Gaming officials are set to rule on the settlement on June 24.

During the Wednesday hearing, Mr. Pineault apologized to Gaming Control Board members and took “full responsibility for the lapse of judgment and failure on the part of our team to uphold the standards” of regulators and the state as a whole.

He went on that “there’s nothing more important to me and our organization than the safety and security of our team, guests, and the community and I recognize there’s no excuse for this behavior.” Mr. Pineault further told regulators that they took all concerns and violations raised very seriously and that they took “immediate remedial action” after learning about the opening night incidents.