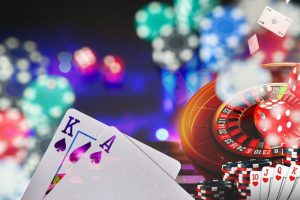 A new Elk Valley Casino is taking shape on a site off U.S. 101 in California’s Crescent City, just two miles away from Elk Valley Rancheria’s existing gambling venue of the same name.

Elk Valley Rancheria finally broke ground on the new property last month after nearly two decades of hurdles and challenges of different nature. The new casino is expected to open doors in the spring of 2022.

The facility will be located on a portion of land approximately two miles away from the current Elk Valley Casino, on a hill near the intersection of Humboldt and Sand Mine roads in Crescent City. It will offer generous ocean views.

Elk Valley Rancheria officials have told local media that phase one of the project will include a casino floor with about 300 slot machines, table games, and an enhanced poker room. Property Marketing Manager Kurtis Shaul explained that new casino will feature about as many slots as the existing one, while they will add more table games. He further noted that the amenities at the new venue will be more recent and modern as they are looking to build “a building in 2022.”

In addition, the new property will feature a new restaurant and bar, a gift shop, a convenience store, a gas station, and an entertainment-bingo hall that property officials say will be big enough to host conventions and meetings. Other amenities will include spaces for RVs and tractor trailers.

Long Time in the Making

Elk Valley Rancheria Tribal Chairman Dale Miller said that he has been working on building a new Elk Valley Casino since he stepped in as the tribe’s leader more than two decades ago.

The casino’s new home sits about a mile outside reservation land. Putting the land that hosts the new facility into trust was a long and difficult endeavor that took more than eight years, Mr. Miller told local media. The process involved approvals from the US Bureau of Indian Affairs, the California Coastal Commission, the US Army Corps of Engineers, environmental agencies, and the local community.

Mr. Miller said that the casino site is located on off-reservation piece of land “that belonged to the tribe, that had cultural history with the tribe, but also the trust process was to be able to put a gaming facility out there closer to the highway.”

The rancheria’s chair noted that the new gambling venue will mean more jobs for tribal members and will also bring more tourists into the area. Another positive expected from the facility is its event center as it will be able to seat 500 people as opposed to 300 at the existing casino’s event center.

While the tribe plans to celebrate the new venue’s grand opening in the spring of 2022, Mr. Miller said that “the weather has been so good” that they may be able to launch it earlier than expected.

A phase two of the project includes a hotel, but tribal leaders said this could be several years down the road.