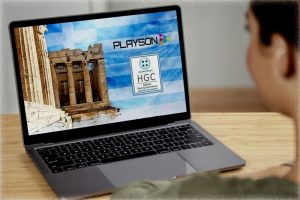 Online casino games maker Playson has been granted a Manufacturer’s Suitability License from the Hellenic Gaming Commission to provide its content to operators in Greece’s newly reorganized iGaming market.

The company underwent a thorough and rigorous application process and after its accreditation by the Greek gambling regulator, it can now move on to signing additional agreements with major operators in one of Europe’s fastest growing regulated markets.

Playson’s license from the Greek gaming industry watchdog means that the developer and provider can now offer hit titles such as Solar Queen, Legend of Cleopatra Megaways, and Wolf Power: Hold and Win, among others, to Greek players.

The Hellenic Gaming Commission recently began issuing new supplier licenses to interested B2B firms after the introduction of several significant changes to the way online casino services must be provided in the local regulated iGaming space.

Under these new tweaks to the country’s gambling law, the maximum bet on any online slot game is capped at €2 per spin. In addition, players have to wait for at least three seconds before being able to spin the reels on any game again. As per another important new rule, the maximum prize a game can award is maxed out at €70,000 per round.

Under the terms of its newly awarded Manufacturer’s Suitability License, Playson will have to make sure that all the games that it provides to Greek players are fully compliant with the new rules.

This new Greek license extends Playson’s presence in regulated markets across Europe and supports its expansion strategy in a bid to reach more players globally.

Commenting on their latest big announcement, Playson General Counsel Andrei Andronic said that they are delighted to receive a license that ensures “a continuation and expansion of our hit games within the newly regulated territory of Greece.” Mr. Andronic went on to say that Greece is a fast-growing market that is at the heart of a crucial region for his company.

The official further noted that they have an appetite for regulated markets and are delighted to add a Greek license to their portfolio. According to Mr. Andronic, this latest announcement “demonstrates our credentials for providing the best and safest games to our partners.”

Playson’s news from Greece came on the heels of several partnership announcements made by the company in recent weeks. Earlier in June, the studio said that it has teamed up with B2B gambling services provider ExeFeed to provide its partner with access to its content.