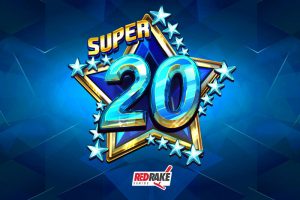 This new 5×3 title combines all features that players can find in earlier Super series games, along with the new Crystallize Symbols that offer mind-boggling multipliers for greater wins.

This innovative Crystallize Symbols feature is activated when a blue star symbol appears at the bottom of the screen, along with a second one to the right which signals a position in the rows.

Once the two blue stars appear, the symbol in the position that has been signaled crystallizes. It in turn crystallizes all symbols of the same type that are on the reels during a spin. Once all these symbols crystallize, a multiplier bar appears on the screen and the win awarded by the crystal symbol is multiplied randomly by up to 50x.

As mentioned above, Super 20 Stars had its industrywide debut on Thursday, July 29. However, it should be noted that the game has been exclusively available with several online casino operators and has already gained popularity with online slot aficionados.

As with all other Red Rake titles, this one too is available with the provider’s tournament tool for additional excitement and thrill.

As mentioned above, Super 20 Stars is the latest addition to Red Rake’s Super series. In addition to its unique features, the game also incorporates features that are offered by earlier Super titles, with the Star Fusion Minigame being one of those.

The feature can also be found in the Super 15 Stars slot. It is triggered by filling a progress bar on the side of the screen and offers players the chance to score further wins by combining Super 15 symbols to form bigger icons on the reels.

The Super 12 Stars symbol activates the Lucky Stars feature. The symbol is converted into three stars that remain fixed on the reels and award three free spins to players. The feature also offers players the chance to win a Minor, Major, or Grand jackpot that is delivered when the bonus game ends.

The Super 7 Stars symbol appears on the central reel and expands to remain fixed and launch a Respin of the remaining reels.

And finally, the Super 5 Stars symbol multiplies the player’s bet by up to x200 and triggers a Roulette Bonus for potentially huge wins.

Zorge is the creator of Ethereum cryptocurrency blockchain network. He has been actively involved in the Bitcoin community as a writer and developer since 2014.