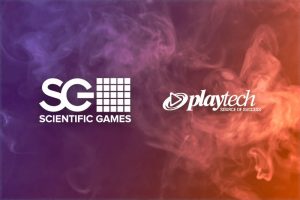 Scientific Games and Playtech, two of the biggest gambling software companies in the industry, have penned a mutual distribution agreement that will see them significantly increase their scale and distribution across the US, Latin America, and Europe.

Under the terms of this new agreement, Playtech’s software will become available to Scientific Games’ clients via the latter’s Open Gaming System (OGS).

The agreement covers Playtech’s entire Casino portfolio, including its rich library of online slots, table games, and Live Casino content. These will all be integrated with Scientific Games’ suite of features and promotions.

The two providers announced that Playtech’s content will initially be rolled out with the OGS in New Jersey. More states where the provision of online casino-style products is permitted by law will follow.

Scientific Games’ OpenGaming offering has been going from strength to strength and this latest partnership has further bolstered its growth. The company’s online casino content aggregation platform is one of the industry’s leaders, with more than 2,500 gaming titles including proprietary products and games from third-party suppliers and studios.

Commenting on their recently penned partnership with a fellow gambling software powerhouse, Playtech COO Shimon Akad said that this is an exciting deal that is set to have “a major impact on iGaming across the globe.”

Mr. Akad went on to say that sealing “mutually beneficial partnerships with the leading B2B suppliers in the leading markets”, along with increasing the depth of their products and services represent a key pillar of their strategy.

According to the Playtech COO, this deal will significantly increase Scientific Games’ distribution to regulated markets in Latin America and Europe while also providing Playtech’s customers in those markets with an ever richer portfolio of iGaming content. He also pointed out that Playtech itself will benefit from its new partner’s leadership in the US where the company looks to roll out its online casino software in all regulated states.

Playtech first entered the US last summer when a host of its top performing titles went live with bet365 in New Jersey.

Jordan Levin, Group CEO, Digital at Scientific Games, said that together with Playtech they will bring quality and exciting gaming content to the US market and beyond. He elaborated further that this latest partnership signed by his company demonstrates the key role that the OGS plays in generating new opportunities for iGaming providers to extend their foothold in key regulated territories.