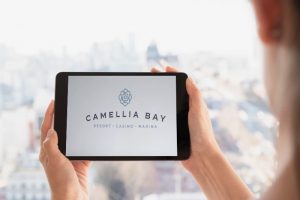 The company announced on Thursday that it has picked Camellia Bay out of thousands of suggested names, paying homage to its planned resort’s host city as Slidell’s nickname is the Camellia City.

P2E representatives previously promised that the company would involve the host community in choosing a name for the property. During a series of meetings with Slidell and St. Tammany Parish residents, the developer has asked attendees to voice their opinion on a number of matters, including what type of dining outlets the casino resort should feature and what its architectural style should be.

Residents were further asked to come up with a preferred name. More than 7,000 people offered a moniker and around 100 proposed one that involved camellia in some way or another.

Kimberly Frady, an Ochsner nurse who works at Slidell Memorial Hospital Cancer Center, came up with Camellia Bay. On Thursday, she was presented with a $5,000 check for proposing the winning name for the resort.

Todd Moyer, head of marketing for P2E, said during a special event held Thursday at Patton’s Salmen-Fritchie House that they liked being able to pay tribute to the area with their proposed casino’s name. In addition, P2E executives wanted the property’s name to also highlight its planned waterfront location.

Whether Slidell and St. Tammany Parish will host a casino is a matter that will be decided on this coming November when a parishwide referendum asking residents to weigh in on the $325 million project will take place.

In 1996, voters overwhelmingly supported a ban on video poker and riverboat casinos in a local referendum. They will now have the chance to overturn that ban.

P2E first revealed its Slidell casino plan about six months ago. Over that period, state lawmakers who supported the idea successfully, but with quite some challenges, swept a measure authorizing the local vote in the Legislature. The St. Tammany Parish Council last month voted to put a casino question on the November 13 ballot.

Developers originally planned to invest $250 million into the casino complex, but then upped that original investment to $325 million. If approved by voters, Camellia Bay will be located on 50 acres of land at Interstate 10’s Exit 261 along Lake Pontchartrain just outside Slidell.

It will feature a casino with slot machines and table games, a hotel, multiple dining outlets, an open-air pool, a 50+ slip boat marina, three live music venues, and meeting space, among other amenities.

Aside from strong support, the project has also attracted powerful opposition, mostly from local religious groups. The proposed casino’s proponents argue that it would serve as much-needed economic boon for the area, but critics claim it would do more harm than good.