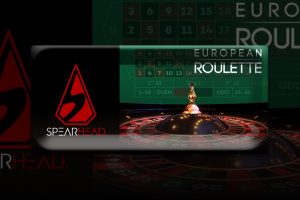 Spearhead Studios this week rolled out its first table game that is part of the casino games developer’s comprehensive 2020 roadmap.

Spearhead Studios presented online casino enthusiasts with its own take on European Roulette. The developer’s new title is designed with a mobile-first approach and is available across all devices.

The standard table view features all of the traditional inside and outside bets as well as a range of special bets and statistics-based bets such as hot and cold numbers. Players are also offered the opportunity to switch to racetrack view and choose from one of a series of classic call bets as well as save up to ten favorite bets for future use.

The game’s RTP is set at 97.3%. In addition to its other features, it also offers spin result history and other important betting information.

As mentioned earlier, European Roulette is the first table game in Spearhead Studio’s portfolio and the seventh overall to be released by the game development studio.

Commenting on the newest addition to their games range, Spearhead Studios Game Development Director Kevin Corti said that they “had an emphasis on delivering a premium mobile user experience” when creating European Roulette and that they wanted to offer players “the full breadth of bet types and features that they have come to expect from other providers, but to also make the experience much easier and delightful.”

Spearhead Studios Managing Director Mathias Larsson added that they are excited to bring their first table game to the market and that “besides looking amazing, the game contains advanced features offering everything that a player wants.”

Mr. Larsson also revealed that Spearhead Studios intends to release at least eight more slot games by the end of the first half of the year and to introduce its second table game sometime in July. That second game will be Blackjack, representing the game developer’s take on the beloved casino classic.

Spearhead Studios is one of the newest game development studios in the iGaming industry. The studio was established last fall and its formation represented major iGaming company EveryMatrix’s first foray into the game development sector.

Spearhead Studios’ team comprises the team that was behind GiG Games, the development arm of Gaming Innovation Group. GiG offloaded the studio to EveryMatrix last fall in a bid to reduce costs and focus on other areas of its business.

Spearhead Studios’ portfolio includes its first and highly popular Book of Souls slot as well as Wilds of Wall Street, Midnight Madness, and Wild Reels, among others.